From the King of the Atlantic, the great black-backed gull, to the more gentle opportunist, the western gull, on the Pacific Coast 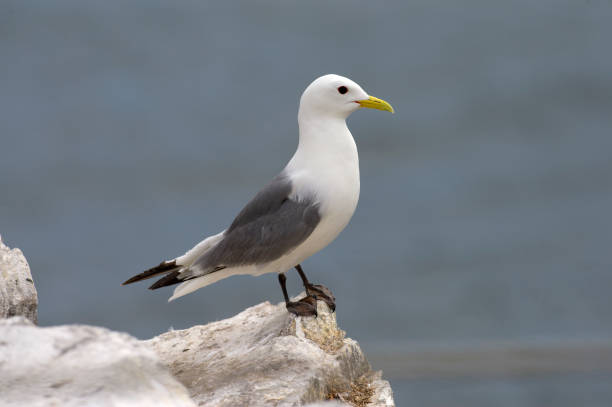 These birds were seen regularly by me at Spurn Point during the 1960s, and occasionally I would watch them as they attacked other birds. They were aggressive and vicious. The prey they caught included smaller gulls, terns, and ducks, as well as migrating songbirds that they swallowed immediately they were seized. Once I watched a great black-backed gull chase a tern out at sea ; it attacked its prey while in flight, repeatedly jabbing the poor tern until the exhausted bird collapsed into the water where it was eaten. They also chase birds to rob them of the food the bird has already caught. I also saw them during a 1968 visit to Minsmere Nature Reserve that is described in chapter 22 of my novel She Wore a Yellow Dress. 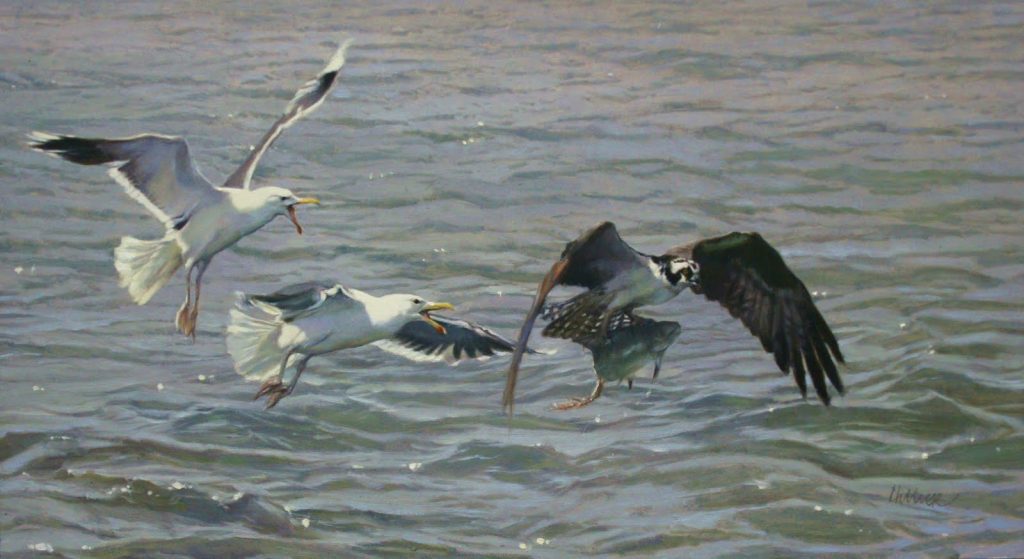 The great black-backed gull is nicknamed  “the minister-of-the-sea”, or “coffin-bearer”, presumably because of the adult’s crisp black and white appearance. You can identify the birds  by their size, the black coloration on  their broad upper wings, the gleaming white head, big yellow bill and orange-red spot on the lower mandible, plus pinkish legs and yellowish eyes.

It is a species whose fortunes have been closely linked to its relationship with humans. During the 1800s, great black-backed gulls were harvested for their feathers which were used by the hat-making trade, and as soon as this practice ended,  their numbers rebounded. The use of garbage dumps and other sources of human refuse have also helped them add to their numbers and expand their territory. Today about 35,000 birds breed in the UK, and this number increases to around 75,000 during winter when migrating birds arrive from the north. 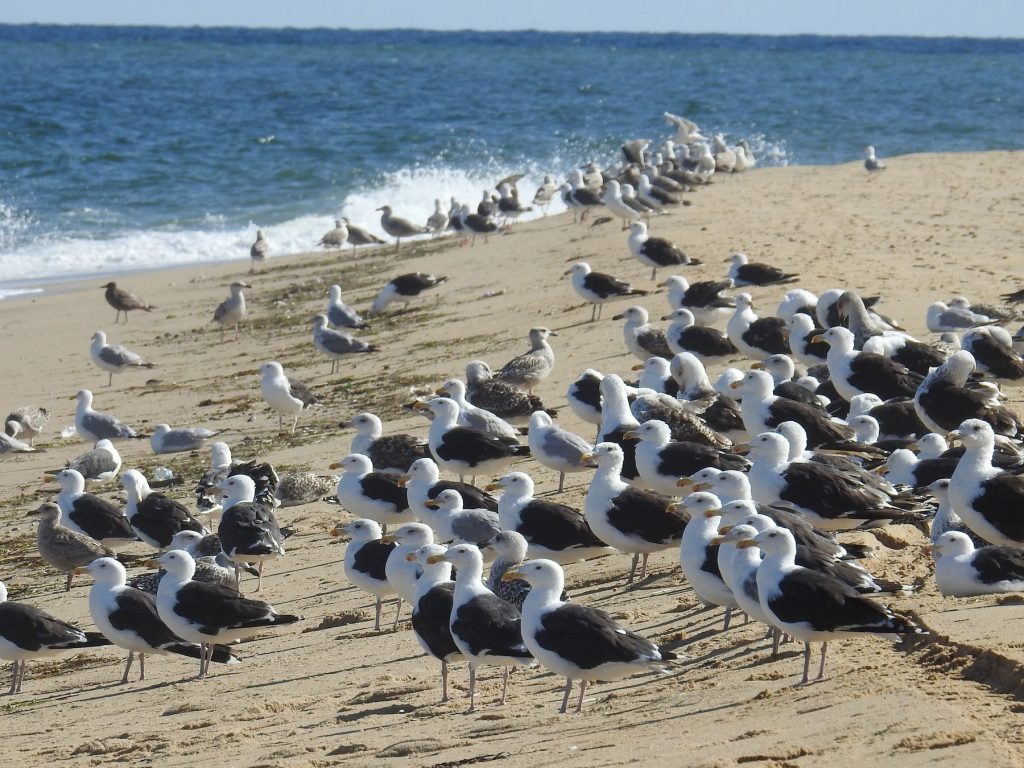 The range of the great black-backed gull extends across northern Europe and over the Atlantic to North America’s Atlantic Coast and Great Lakes. There are an estimated 800,000 birds worldwide, of which about 350,000 are resident in Europe.  These gulls are closely monitored in the UK in circumstances when they choose to nest close to humans and create a risk to human safety. Thus the bird is kept on the conservation amber watch list in Britain.  In North America, its status is classified as Least Concern since its range is expanding and its numbers increasing. 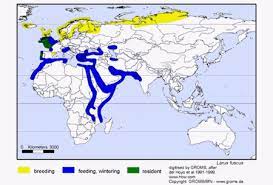 Once I moved to California, I could no longer see these powerful and dominating gulls. In California, the largest gull is the western gull which measures around 25 inches (64 cm) in length. It lives along the Pacific Coast, ranging from British Columbia, Canada to Baja California in Mexico. However, there is nothing fierce or aggressive about this species. It feeds on fish and invertebrates and consumes roadkill on land. Because of its restricted distribution, its population is relatively small at around 120,000 individual birds. This compares to the smaller California gull, that has a similar range, whose population is estimated at 600,000. I usually observe both species here daily in the San Francisco Bay Area. Because its population is stable western gulls are classified Least Concern for conservation purposes. 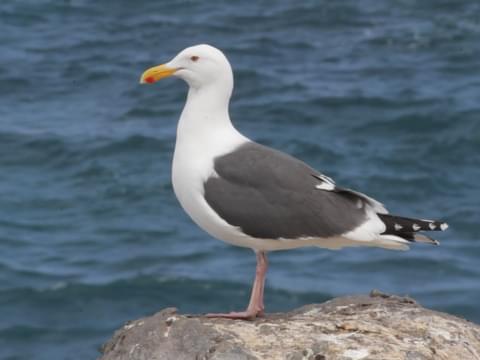 Their plumage is mainly bright white, although their back and wings are colored dark gray and they have black plumage with white spots at the rear edges of their wings. Their beaks are thick and bright yellow and display a red spot on the front of their lower bill. Their legs are pink. These gulls are strictly carnivores and eat mostly fish and marine invertebrates.

The future of both the great black-backed gull and western gull appear to rest heavily on their relationship with humans, plus the flexibility of their diet. Temperature changes have both positive and negative effect on their livelihood. For example, as sea water warms and plankton sinks into deeper and colder water, the fish follow them down and become less available to surface-eating birds. Conversely, in Europe’s North Sea, global warming has created an abundance of swimming crabs.

One final word is to acknowledge the many different species of gull around the world – over 50 species – and the difficulty this causes in identifying individual gull species because they often look alike. In the UK, there are six types of commonly occurring gull (common gull, black-headed, herring gull, kittiwake, lesser black-backed, and of course, the King of the Atlantic, the great black-backed gull. That number is in the process of rising to seven as the Mediterranean gull makes its home in Britain.

In North America, there are 28 types of gull. California hosts five relatively common species (California gull, ring-billed gull, glaucous-winged gull, Heerman’s gull, and of course, the very visible western gull), but this number dramatically increases in winter when California is home to several migrating species such as the herring gull, Thayer’s gull, and Sabine’s gull. I continue to develop my abilities to identify each species rather than clump them together as “seagulls”! 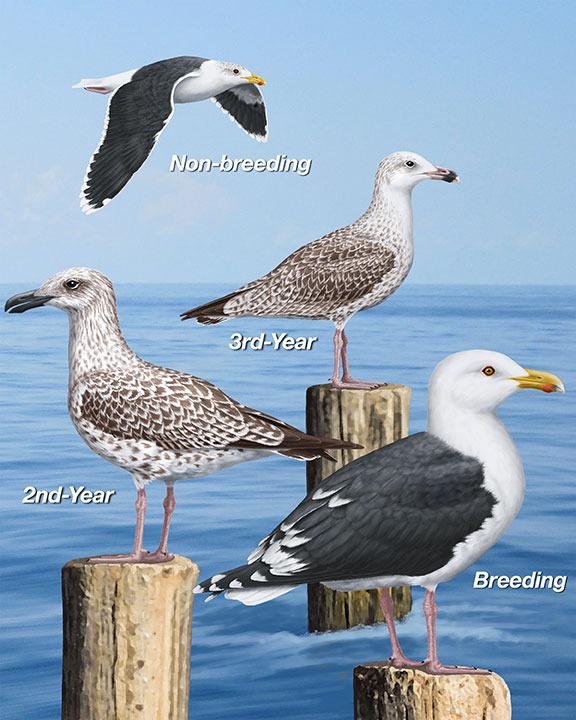 Author: John Cammidge
Filed Under: Bird Blog
When was the British Lapwing eaten as a countryside delicacy and why is it under threat today?
The bullfinch and the fruit trees