The Extraordinary Abilities of Birds

According to research, birds are astonishingly intelligent creatures. Jennifer Ackerman in her book The Genius of Birds dismisses the belief that idioms such as “bird brain”, “eating crow”, “cuckoo”, and “feather brain” have anything to do with a true understanding of the brain structure of birds, and my early experiences as a bird watcher confirm her belief. One of my first memories of unusual bird behavior is at Spurn Point in Yorkshire when two partridges flew over the Warren. The female hit the overhead electric wires and decapitated herself, and the male landed and called out for her for at least 30 minutes. Further details of my adolescent bird watching are in my novel She Wore a Yellow Dress.

There are many other illustrations of bird intelligence that I could give you from my experiences but I want this article to focus on the more bizarre aspects of bird behavior. Examples of strange conduct I have used in previous blogs include birds feigning injury, shrikes impaling prey on thorns before eating their victims, fulmars spitting foul liquid at anything that threatens their nest, and the parasitic behavior of Eurasian cuckoos and brown-headed cowbirds. 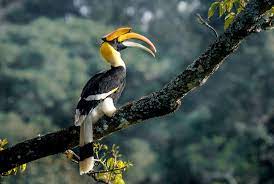 Let us start with Indian hornbills.  There are nine species in India, so how about choosing the largest one, 40 to 48 inches long (100 to 120 cm), the great Indian hornbill. It is native to the tropical rain forests on the Indian subcontinent and in south-east Asia, and like all hornbills, has a huge casque on top of its massive bill. The casque is hollow and serves no known purpose, but for this article the species uniqueness lies in something quite different.

The female builds a nest after entering the hollow of a large tree and then seals the entrance while she is still inside so that she can no longer leave. She uses dung and pellets. The male supplies the pellets of mud from the forest floor; first he swallows the material and later regurgitates it as saliva-covered nesting matter for the female to use. During the next 8 to 10 weeks the male feeds the female through the nest slit as she molts, the eggs hatch, and the chicks become half-developed.

Another example of unusual bird behavior involves the red-breasted nuthatch, a resident and native to most of Canada and the United States. It is a small compact bird with a very short tail, and like the hornbill, nests in holes in trees. After building the nest, it will spread a coating of conifer resin at the entrance to the hole, sometimes applying it with a piece of bark, for the purpose of preventing other birds, like wrens and woodpeckers, from using the space.

Should you happen to be in New Guinea, look out for a bird that is poisonous, known as the hooded pitohui. It is a small black and orange bird with powerful bill and dark red eyes that inhabits the hills and low mountains of the islands of Papua New Guinea.  The poison is in its feathers and skin. Apparently, along with the fruit and seeds that they eat, these birds are also partial to invertebrates such as the small melyrid beetle. It is this creature that provides them with the poison, known as batrachotoxin. In humans, in small doses, it can cause tingling and numbing, but in large quantities it may lead to paralysis, cardiac arrest, and death. Local people leave the bird alone, call it the “rubbish bird”, and consider it inedible. Snakes that eat its eggs may become sick because of the poison the female wipes onto her clutch of eggs.

Across the globe, in the Amazon and Orinoco basins of South America, lives a bird known as the hoatzin (pronounced wat-sin), and sometimes called the reptile bird, skunk bird, or stinkbird. It is pheasant-sized, with a long neck and small head, and feeds on leaves and fruit. It has no known close relatives among the bird world, but like some dinosaurs, Hoatzin chicks are born with two claws on each wing that survive for the first three months of their lives and are used for climbing and balance.

The hoatzin’s digestive system is unique among birds. It employs bacterial fermentation in the front part of its gut to break down vegetable material, much like cattle do. However, this process causes the bird to produce a highly disagreeable, manure-like odor. While indigenous people sometimes collect its eggs, it is rare that they hunt the bird because they consider its meat to be undesirable. The hoatzin is fairly common in its range today because it inhabits mangrove swamps and riverine forest.

Last but not least, let me introduce you to the Eurasian wryneck, a member of the woodpecker family that pretends to be a snake when threatened. In my early birdwatching days it was a summer resident in the UK, from March to mid-July, breeding chiefly in southern England and occasionally in Wales. Today it is only a passage bird with less than 300 sightings in Britain annually.

It is sparrow-sized and feeds on ants, and like the hornbill and nuthatch, nests in holes in trees.  When threatened, it has the ability to turn its head 180 degrees, twist its neck, and hiss like a snake, and is nick-named snake bird because of this behavior. It has often been linked to witchcraft, curses, and evil spells. Using its Latin name of Jynx torquilla, it is supposed to “jinx” people (i.e. bring them bad luck). 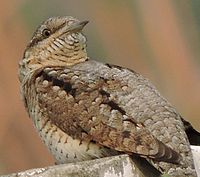 As you might expect, none of these unusual birds are particularly threatened at the moment, either by global warming or human interventions.

Author: John Cammidge
Filed Under: Bird Blog
The Growing Abundance of Canada Geese
The Global Reach of the California Quail