The Global Reach of the California Quail

Admired by many, the California Quail, about the size of a pigeon, is a hardy and adaptable ground-dwelling game bird that was originally resident in the United States from Southern Oregon south into Baja California, but has extended its range into the surrounding states and British Columbia. It is often adored by the general public, it was an important source of food for Native Americans, it is still legally hunted for its meat, and it is a fun bird to be seen while bird watching. Back in 1818, several representatives of the species were gifted to King Kamehameha 1 of Hawaii, and in June 1931 it became the state bird of California. It also has featured in several Walt Disney movies, including “Bambi”. Today it continues to inhabit the slopes of Mauna Kea and Mauna Loa on the Big Island of Hawaii.

This bird was totally new to me when I moved to California from England. There is the sturdy Common or European Quail in Britain, but very few visit annually (possibly under 1000), and, as a migrant, it is only present in summer during the breeding season. It is about the size of a Starling, has long, pointed wings, and typically winters in Africa. Because of the small numbers and their presence in summer only, they are not hunted in the U.K., but due to their decline they are on the Amber list of most threatened birds. Admittedly, you can buy quail and quail eggs in the U.K. supermarkets, but these are typically farmed and sourced from the Coturnix Japanese variety of quail. I never saw a Common Quail growing up in Yorkshire, and was much more familiar with the related Common Partridge and Red-legged Partridge. The latter I would see migrating through Spurn Point, a place described in more detail in my novel She Wore a Yellow Dress, and the former I would catch sight of during harvesting time on the farm. 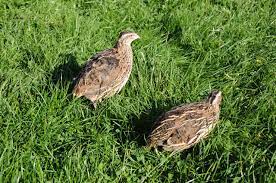 In North America there are five other species of native quail, although only two species overlap with the range of the California Quail. The Mountain Quail (the largest variety in size) is found in the high mountains of the West Coast, and the Gambel’s Quail inhabits the deserts of Utah and the Southwestern United States, into Mexico. The latter was also introduced into parts of Idaho and on to San Clemente Island west of San Diego. The Mountain Quail was introduced to Vancouver Island but has since disappeared. It displays a distinctive head plume like an exclamation mark, and when this is held straight up it indicates that the bird is agitated or alert, and when angled backwards, the quail is typically relaxed, feeding, or resting.

The Northern Bobwhite or Virginia Quail, named after its loud whistled  “bob-white” that sweeps upward in pitch, is the most numerous New World quail (around six million birds) and is native to the east of the Rocky Mountains. The range of the smallest, most secretive, and boldly patterned Montezuma Quail is primarily parts of Mexico, Southern Arizona, and New Mexico, and the range of the Scaled Quail, named for its scaly appearance, is likewise restricted to arid areas of the Southwest and Central Mexico.

Quail in North America are permanent residents, although some will move to lower elevations in winter, whereas species native to the Old World usually migrate. Additionally, New World quail belong to their own family of birds whereas Old World quail are members of the Pheasant family which includes partridges and peafowl. The plump-looking California Quail, sometimes called the California Valley Quail, is the gem of the quail collection because of its distinguished appearance and sociable and charming behavior. The bird sports a curled, comma-shaped black head plume that hangs forward from the top of its head. This topknot looks like a single feather but is actually a cluster of six overlapping feathers. Otherwise, the bird is a blend of gray, brown, tan, and white coloring. The chest of the male is slate gray, and its face carries a white stripe. The Gambel’s Quail has a similar topknot although this one is made up of only one or two feathers. Like its California cousin, it has boldly colored plumage. Who cannot be delighted when seeing a pair of adult California Quail during summer, scurrying across the road, chased by a dozen or so chicks, each dressed in a fluffy down costume, and with rust-colored stripes and black and buff markings.

The California Quail scratches on the ground foraging for food – eating seeds, berries, leaves, flowers, and small insects – and is most typically seen near open woodlands, streams, and in parks. When suddenly disturbed these birds may take off with awkward and rapid wing beats interspersed with short glides. If you do not see them, you may hear their famous “Chicago” call that sounds like “ku-ka-ko”. They typically nest in shallow depressions on the ground, will lay 12 to 16 eggs, and have up to two clutches annually. Sometimes you find nests with more than two dozen eggs which is a feature known as an “egg dump”, when a female lays eggs in another bird’s nest. The male feeds and protects the female and the nest with its eggs. Chicks, when born, lack the necessary digestive tract and have to peck at the adults’ feces to obtain a protozoan that helps them consume their food. To help the young survive, quails form nurseries to watch over the community’s new generation, and once breeding is over, they socialize and travel in small flocks known as coveys. They themselves are eaten by bobcats, coyotes, owls, snakes, and sometimes domestic cats.

It is estimated that, in the United States, one million people hunt quail each year. In California alone, currently around 400,00 quail are harvested during the fall shooting season, although recent wildfires have restricted access to certain parts of the state. Most taken in the state are California Quail, with several thousand Mountain Quail and a few hundred Gambel’s Quail. The state of Idaho is also responsible for harvesting a large number of California Quail and a few Bobwhite Quail, the latter being a species that was introduced into the state during the mid1800s. Fortunately, the global population of California Quail remains at around four million, with three and a half million in North America, and with this population and the size of nesting clutches, the species is not expected to experience significant impact on its numbers because of hunting. In those states that have seen a decline, like Texas primarily due to habitat loss, translocations of quail from other states are used to restore their populations.

No doubt because of their attractive appearance and value as food, the California Quail has spread its wings so to speak, and has been introduced successfully into many other countries. In the late 1800s it was imported into Chile where it was successfully bred, and used to establish populations in Brazil and Argentina. It was successfully introduced into New Zealand during the second half of the 1800s, and by 1890, thousands of canned or frozen quail were being exported to London. Australia has been less welcoming with the California Quail still being eradicated when it turns up in new areas of Australia. They are permanent resident in Victoria and New South Wales. Attempts to introduce the California Quail into Europe have been made since the 1840s but seem to have been successful only in Corsica.

Additionally, other species of New World quails have been introduced overseas, such as the Northern Boblink into several European countries and the West Indies. The Gambel’s Quail made it to Hawaii, on Kahoolawe during 1928, and to Lanai in 1958.

In summary, the California Quail is a prodigious and adaptable bird that provides meat for humans, gives hunters something to shoot at, does not negatively impact humans in any way, and entertains the families who enjoy the outdoors. To the Native Americans, these quail are tasty and easy to hunt, their plumage makes excellent basket decorations, and their eggs were used for cooking. Yet despite the hunting, they have not experienced a huge population decline and presently are classified as of “least concern” for conservation purposes. Another reason is that, like the U.K., most quail that are used for meat in North America belong to the Old World Coturnix Japanese species that is reared in captivity. This species is native to large parts of Russia, East Asia, and Eastern Africa, and is believed to have been domesticated around the 11th and 12th centuries A.D. in Japan. New World varieties are kept more for pleasure, as pets, or to be reintroduced into the wild. I also now know that the Common Quail I failed to see in Yorkshire during my adolescent years has no relationship to the species I observe here in California.