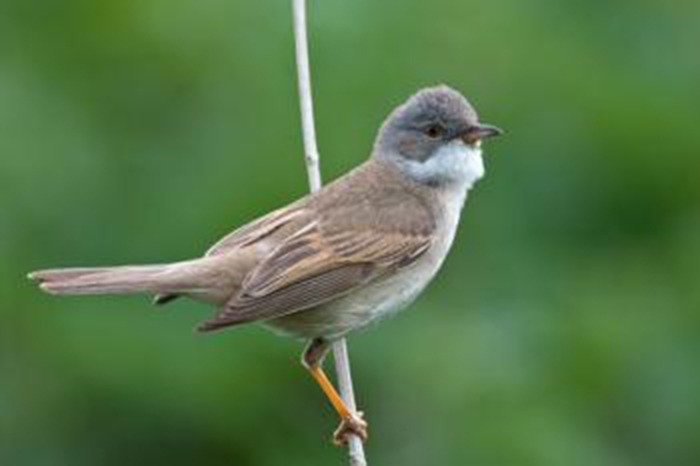 The whitethroat is a bird I became acquainted without knowing its name. I must have been eight years old, and riding a two-wheeler bicycle when I fell into a bed of stinging nettles along the farm driveway. It was painful experience and the reddened rashes covered my arms and face. Once I had rubbed the rashes with dock leaves, I wanted atonement.  I took the undersized scythe from the farm shed and set about destroying  this hurtful vegetation. Close to the hen house, unexpectedly, there appeared a cup-shaped nest made out of grass and plant fibers, strung between several nettle stems. I looked inside. There were three small greenish – gray eggs with dark markings.  I immediately stopped cutting but could see no sign of the parents. The eggs remained there for several days and I eventually took them to add to my egg collection. It was only later that my grandfather told me that I had found the nest of a whitethroat. 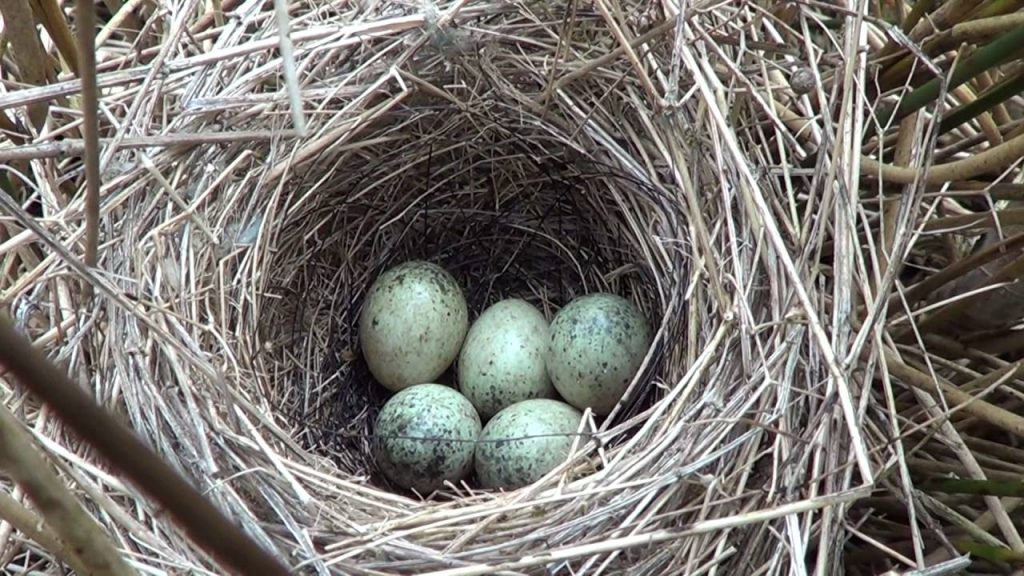 Eggs of the whitethroat

The whitethroat is a small passerine bird that has a pure white throat, rusty-colored upper parts and pale buff under parts. The male possesses a grey head that is absent on the female whose coloring is duller and browner than the male.  Whitethroats are summer visitors to the UK and the books I have retained from the mid-1950s indicate that these birds were common and widespread around York, the area in which I lived. They nest among undergrowth, in lower parts of bushes, among bramble (blackberry) patches, and in nettle beds, and have gained the nickname of “nettle creepers”. They rely on insects for food. 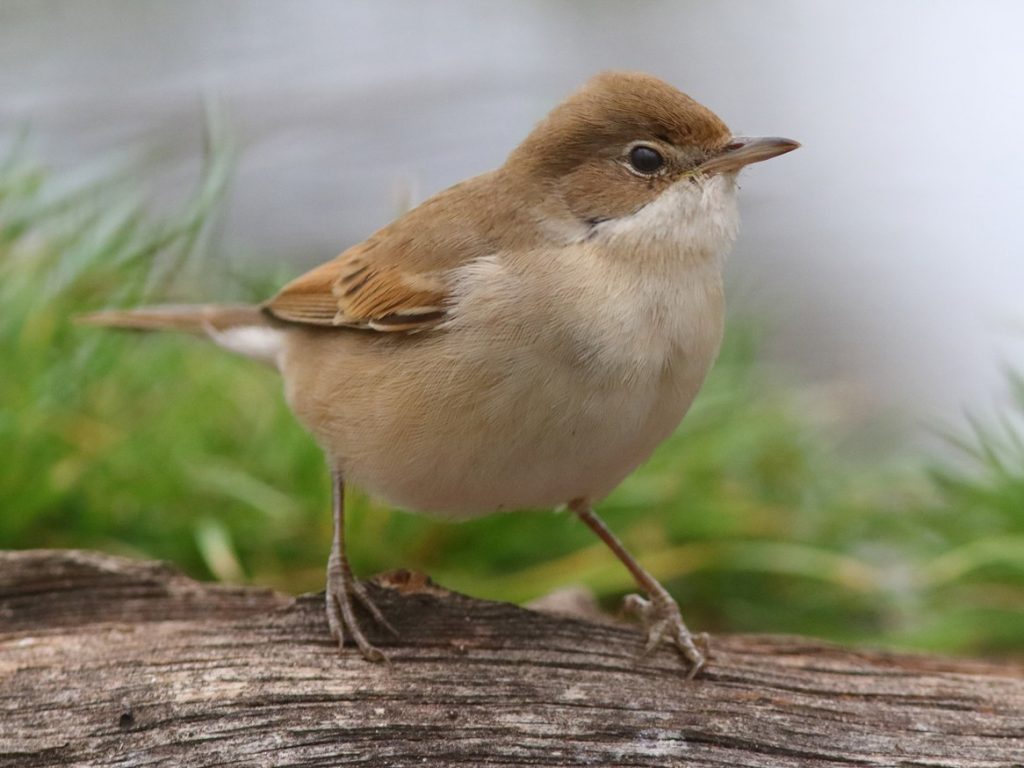 My teenage bird notebook records that I also saw a lesser whitethroat  during May 1960, although I cannot recollect where this was. The lesser species is not as common (about 75,000 breeding pairs in Britain today), and is found mainly in central and southern England. The bird is smaller than the regular whitethroat (also named the greater whitethroat), and is identified by its greyer upper parts and the silky white plumage below. It is a secretive bird, often remaining hidden in bushes and hedges. Both types of whitethroat are Old World species and not present in North America except as rare vagrants. 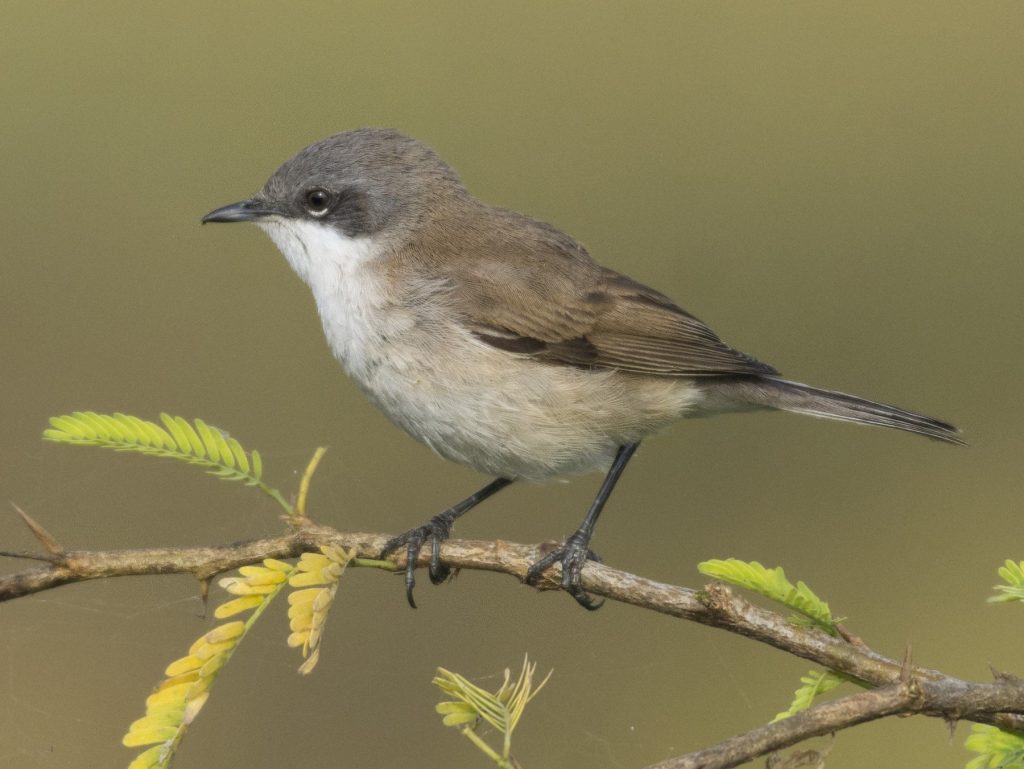 Whitethroats typically arrive in the UK during mid to late April and return to their wintering grounds starting late August. They begin their spring journey in the Sahel Region of central Africa (Senegal eastward to Sudan), and follow a route that can be as long as up to 3500 miles (6,000km). They travel by night, using high altitude tail winds to speed their progress, and consume Salvadora berries to give them the necessary energy. The greater whitethroat uses a conventional north-south route between its wintering and breeding grounds, whereas the lesser whitethroats travel to Europe using an elliptical route around the eastern Mediterranean. 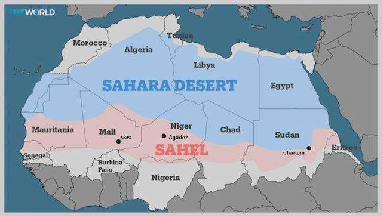 Map of the  Sahel Region, Africa

There is an estimated population of 45 million whitethroats, of which 50 percent breed in Europe. The UK population is estimated at around 1.1 million pairs, although with habitat deterioration in the Sahel Region, these numbers can vary dramatically between years. For example, a serious drought during the winter of 1968 in the Sahel Region resulted in a 90 percent reduction in the numbers arriving in Britain the following year. Temperature change is having an effect by advancing their spring migration by about five days. Both species currently have a conservation classification  of “Least Concern” in the UK, meaning there is no significant reduction in numbers and species continue to maintain a significant breeding population. 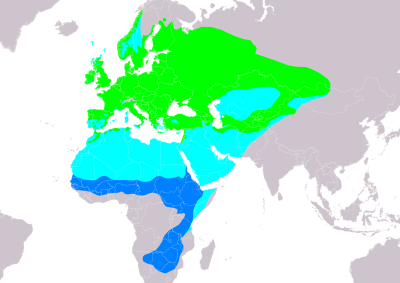 Here in California, there are no whitethroats to see. Instead, I concentrate on a dozen species of  warblers,  cousins to whitethroats. Many of these birds also engage in long distance migration, and winter in central and southern South America. As in Europe, they are now starting their spring journey north several days earlier than they did in the past.

I look back with pleasure on recording my first relatively unusual bird, and I am delighted knowing that both species remain breeding successes in the UK. The situation in the Sahel Region of Africa, however, is worrisome. Droughts followed by destructive floods are more intense, and temperatures are rising faster there than in other parts of the world. The impact on people and agriculture is clear, but less apparent is the effect of climate change on the supply of of wind-born insects, the winter food supply of whitethroats.

Author: John Cammidge
Filed Under: Bird Blog
Was it a Merlin, the smallest member of the falcon family, or did I see something else?
Which shorebird can be blown across the Atlantic to make very rare appearances in Britain?