A Species of Duck that Gives its Name to a Color 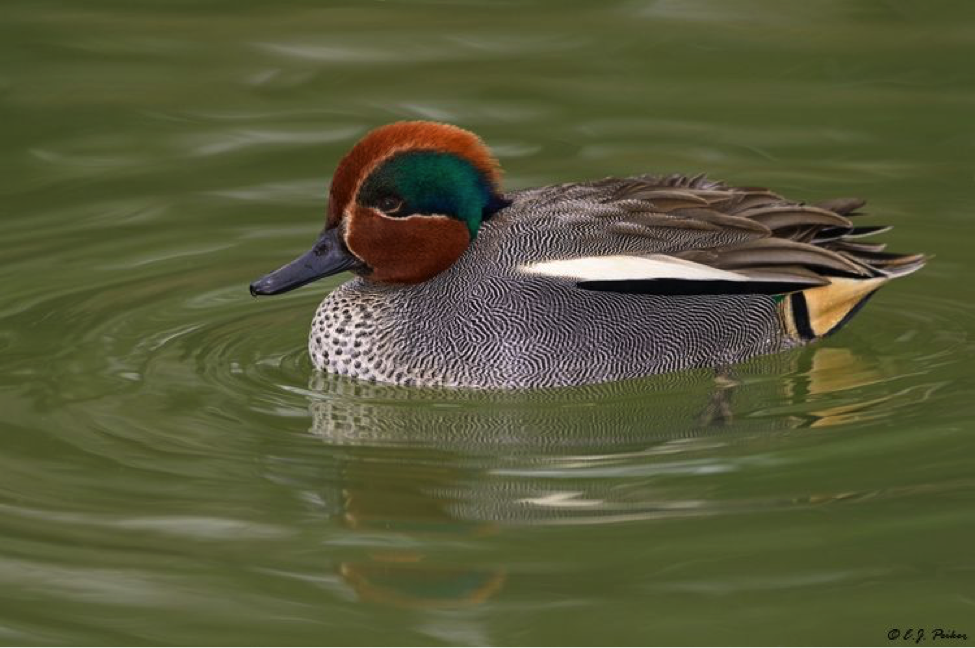 The first Eurasian or common teal I ever saw was a flock flying south over the sea at Spurn Point, Yorkshire, in England, during the early 1960s, presumably on their way to their wintering grounds around the Mediterranean. Spurn Point was a regular haunt of mine as a bird watcher during my late teens and early 20s, and I still have fond memories. I chose to include some of these recollections in my recently published novel, She Wore a Yellow Dress (by John R. Cammidge). While essentially a coming-of-age story during the 1960s and 1970s, I share in each chapter at least one species of bird that featured in my life at the time.

The identification of this small duck with its stout neck and short tail occurred during my early stages of bird watching. Migrating teal usually do not interrupt their travel, unlike many other species of duck. In Europe, the bird is sometimes known as the Eurasian green-winged teal, and they are ducks that feed in shallow waters by tipping their heads into the water to find food. This  species of teal  breeds across Euro-Siberia, a region that extends from Iceland to over most of Europe, and to Siberia and the Kamchatka Peninsula. In the UK, around two thousand pair breed in northern Britain,  but as many as 200,000  spend winter here. It has a very close relative – maybe even the same species – in North America that is called the green-winged teal. Now that I live in California it is this bird I see during winter. 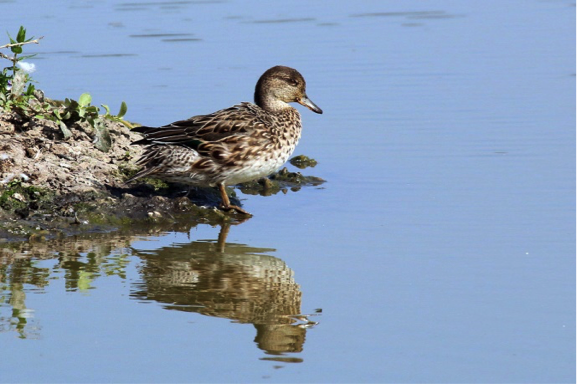 Look for the male’s chestnut-colored head, with a broad green eye patch, a spotted chest, grey flanks and a black-edged yellow tail. Females are mottled brown but both genders display bright green wing patches in flight. The Eurasian and North America varieties appear almost identical except the male green-winged has a vertical white bar on the side of its breast and the common teal has a horizontal white stripe along the inside wing feathers. During winter, the two may mix together when small numbers of Siberian and Alaska-breeding Eurasian teal pass down both coasts of North America. Similarly, green-winged teal can be blown across the Atlantic Ocean to Europe. The two subspecies interbreed where their range overlaps. 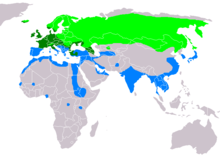 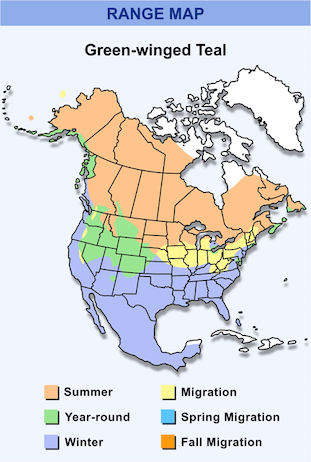 Large flocks form outside the breeding season and are recognized in flight by their quick wing beats and veering and twisting acrobatics. You usually see them on calm bodies of water such as marshes, shallow lakes, wetlands, and estuaries.

The green coloring on the teal’s head has been used to describe a shade of blue-green known as “teal’, and apparently was first used in 1917. 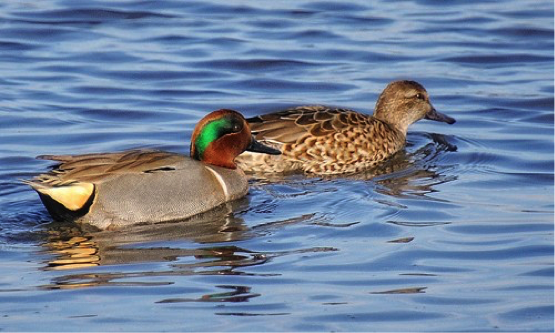 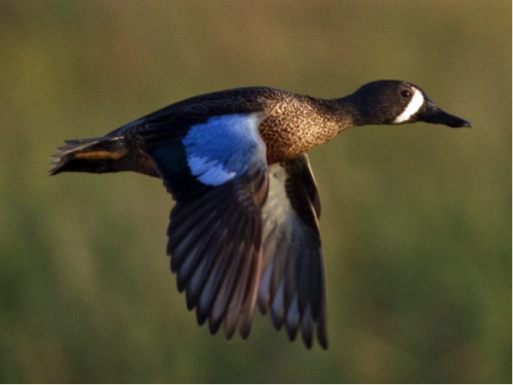 The American green-winged teal is widespread across North America, with an estimated four million birds  breeding in Canada and the northern USA, and they migrate south across the continent during August, returning to their breeding grounds starting in early March.

While the green-winged teal is the commonest of this family of ducks in North America, the blue-winged species is also widespread, but absent in desert areas and also rare along the West Coast where they are outnumbered by cinnamon teal. They use the Atlantic and Mississippi flyways rather than the Pacific corridor during migration.

You need to avoid confusing the green-winged teal with the American wigeon that is slightly larger, and the male wigeon lacks the cinnamon-brown coloring on its head. There is also the larger and very common mallard whose drake possesses a gleaming green head, and both sexes exhibit blue wing feathers in flight, possibly causing confusion. 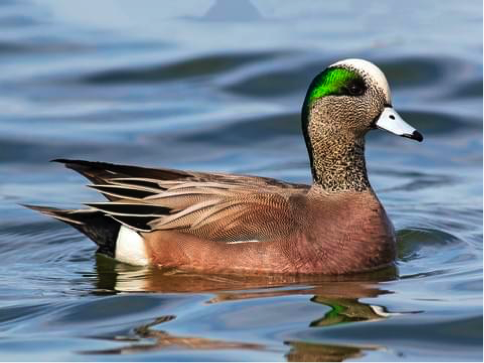 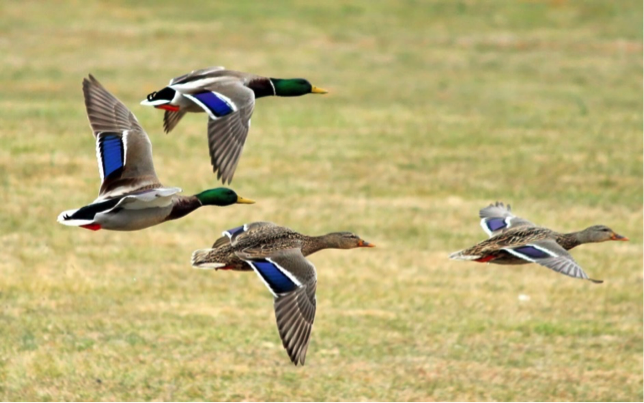 Finally, there is the cinnamon teal in North America These are less numerous than the green and blue-winged species, with an estimated 150,000 to 300,000 that breed primarily in the Great Salt Lake region, the San Luis Valley of Colorado and the Caribo-Chilcoton parklands of British Colombia. Many migrate south to California, and as far as Mexico and Central America for winter but their range is restricted western North America. The male has a cinnamon-red head, neck, breast and belly, a black back and rump, and a characteristic red eye, black bill, and yellow legs and feet. The female is a rustier colored and heavily streaked. 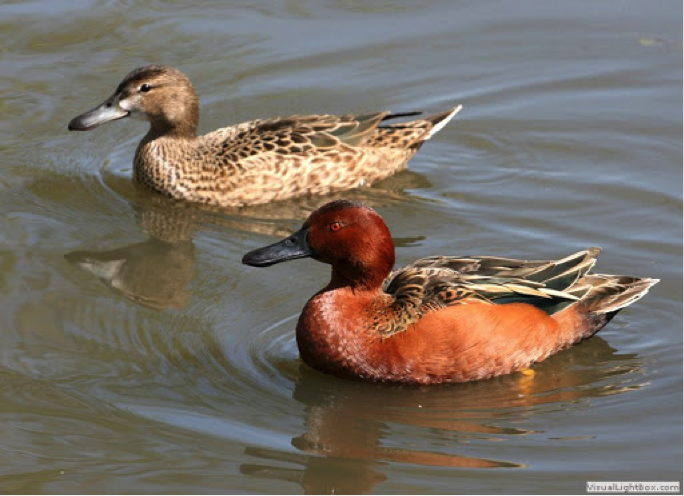 In Pacheco Valle Woods, a neighborhood in the city of Novato, CA, and named after Ignacio Pacheco, an early Californian rancher, the streets are called after species of birds, and include Cinnamon Teal Lane. However, there is no record of how these names were selected.

Additionally, I could never have seen cinnamon teal at Spurn Point or elsewhere in the UK since it is only a rare vagrant to Europe, whereas in California it can appears as a fall and winter resident. My first sighting of this species was at the Madrona Marsh Preserve in Torrance, Southern California.

The only other duck possessing a cinnamon-colored face that might cause confusion is the canvasback, but this is a large duck and dives for food rather than dabbles. 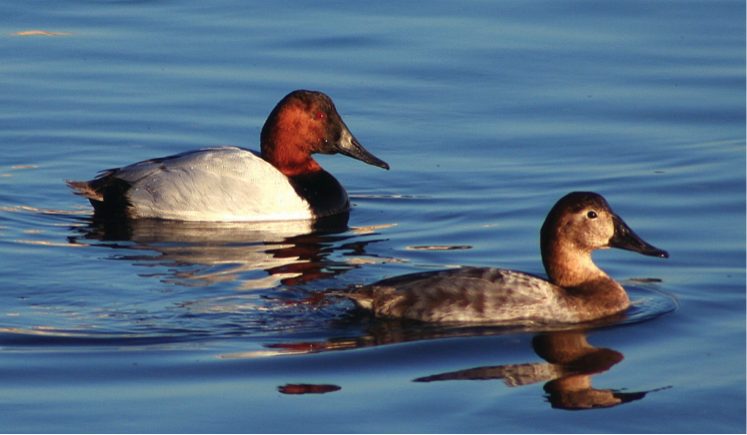 Reductions in water availability due to climate change may reduce the teal’s habitat and affect its future breeding populations that leads to a decrease in numbers. In the US, however, its wildlife conservation status is of Least Concern, whereas in the UK it has made it onto the Amber Watch List because of a decline in breeding numbers.

Author: John Cammidge
Filed Under: Bird Blog
Dotterel, a small plover, and a word in Britain used to describe a person easily deceived; why?
Mafia-Style Behavior Among Birds