As a boy many years ago in northern England, I pursued a little brown bird called a hedge sparrow, flicking its tail and shuffling through dense bramble undergrowth and along a hawthorn hedge, carefully carrying several furry brown caterpillars in its bill. Today there are about 2.3 million breeding pairs of hedge sparrows in Britain. The dingy-colored bird was about 5 inches/14 centimeters long, and is called by some a “dunnock” because of the Old English meaning of “dun” for brown and “ock” for little. 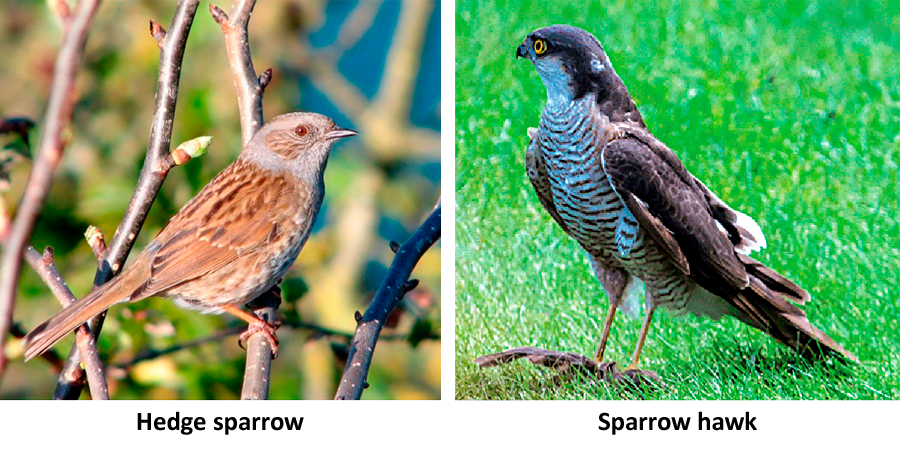 As the bird disappeared, I pushed inside the thorn-bearing bushes and could see the nest but not reach into its cup-shaped construction because the thorns tore at my skin. Instead of it containing several fledglings, there was only one large barrel-chested chick that was constantly calling for food and already twice the size of the hedge sparrow. I realized that I had discovered a young cuckoo bird under the care of its adopted parents. The common cuckoo, a dove-sized bird, is a migrant to Britain from early April to late July, and winters in Africa south of the Sahara. It enjoys a wide breeding range across Europe and Asia, and while there are concerns for its future in the UK, with an estimated global population of around 50 million, it is not considered threatened globally. 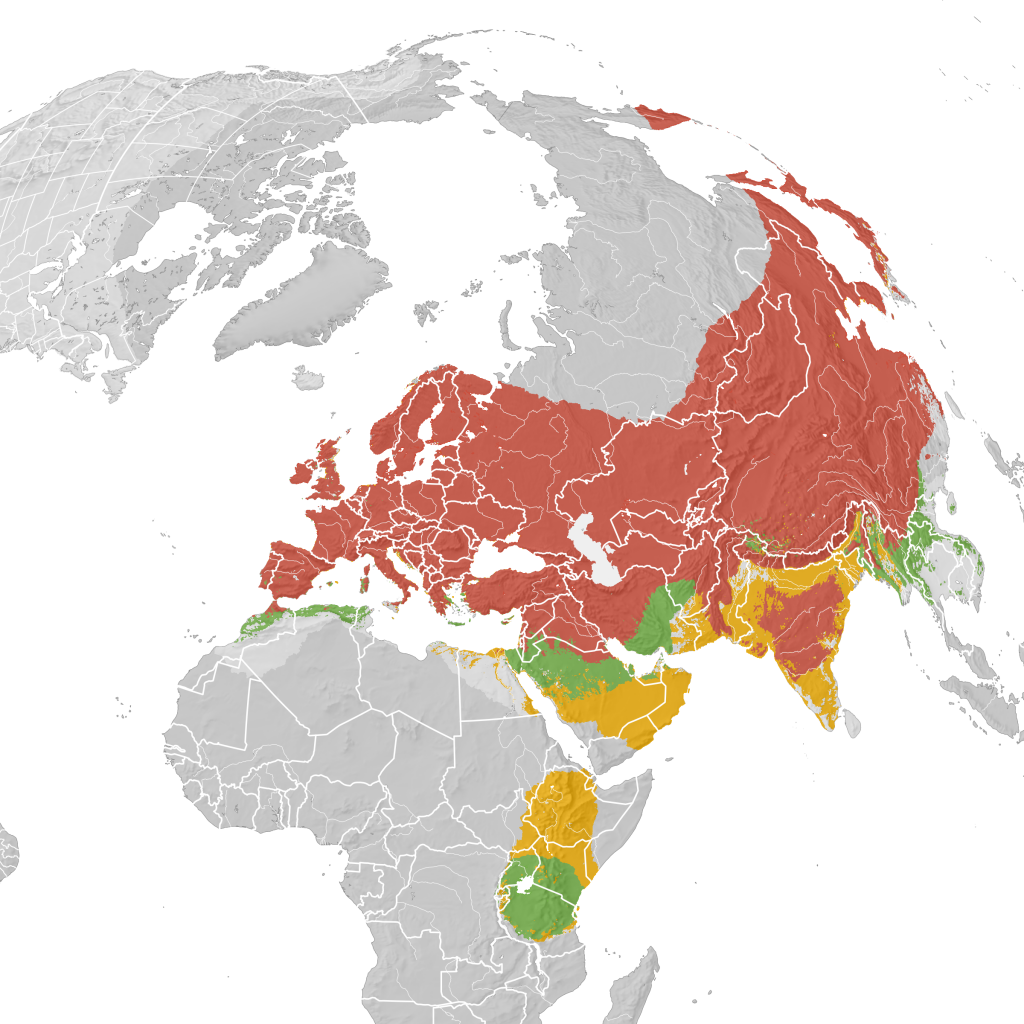 It is one of very few brood parasites among birds that uses other bird species to raise their young by laying eggs in the other birds’ nests, usually birds much smaller than they, such as the dunnock, meadow pipit, robin, pied wagtail and reed warbler. During spring, it is usual to hear in the distance the male’s repeated and monotonous cuck-oo call that it uses to attract its mates for breeding. The adult cuckoo bird has dark blue-grey plumage on its upper parts, and dark barred feathers on a white background below, plus a long, graduated tail and pointed wings. Its general appearance is similar to a small hawk.

Since my sighting, the number of cuckoos in Britain has declined by over three-quarters to around 15,000 breeding pairs. The reason for the decline is unclear and maybe as much to do with the bird’s more perilous migrations each year caused by drought rather than loss of habitat and decline of food resources. Its hosts remain abundant although possibly due to global warming they now nest earlier, thus reducing the number of suitable nests available for the cuckoo to parasitize. 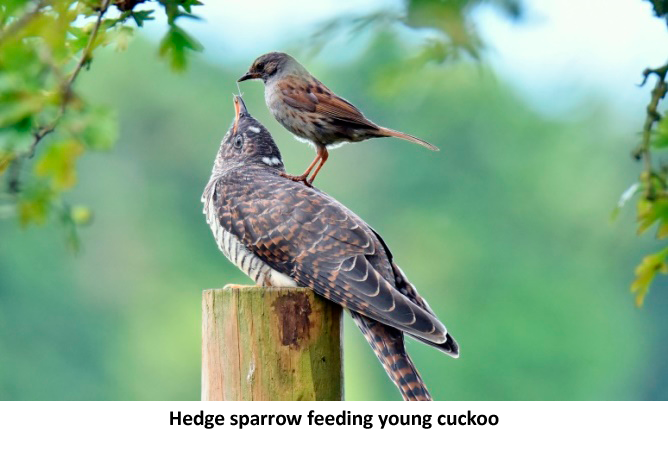 Curiously, the three cuckoo species in North America (yellow-billed, black-billed and mangrove) are not brood parasites – they rarely lay their eggs in the nests of other species – instead building their own nests and rearing their own chicks. They are less noisy than the common cuckoo bird, often emitting a softer cooing sound.

To find a brood parasite in North America, you have to turn to the stocky brown-headed cowbird, the main obligate brood parasite on this Continent. There is also the bronzed or red-eyed cowbird, but its distribution is limited to along the Mexican border and southwards. Members of the species are songbirds, belonging to the blackbird and oriole family, and the brown-headed variety is abundant from coast to coast in the 48 lower States and southern Canada. They lay their eggs in the nests of birds such as flycatchers, warblers, vireos and sparrows, and are known to have adopted over 200 bird species as their hosts; they are not selective, unlike the cuckoo, and their breeding population is estimated to have increased to 120 million. They inhabit farms, fields and prairies, and centuries ago probably followed the bison herds across the Great Plains to find insect prey flushed up by large grazing animals. 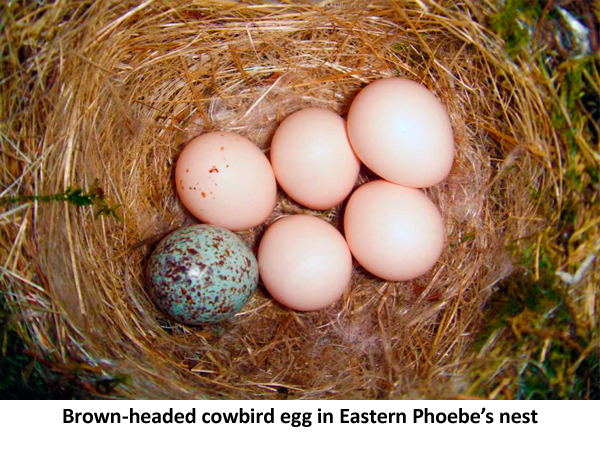 So how do brood parasites on both sides of the Atlantic go about selecting host birds and forcing them to incubate their eggs and rear their chicks? The advantages to the brood parasite are that they are given more time for procreating, finding additional mates and producing a large number of eggs. The typical clutch size for birds is 1 to 5 eggs, with the possibility of additional clutches if there is nest failure.

The female cuckoo annually produces 12 to 22 eggs, usually laying one in different host’s nests and using the same species that reared her. The cowbird is not so picky and is considered a “generalist” when it comes to choosing its foster host. It will lay 30 to 40 eggs each season, one in each host’s nest. Afterwards, the cowbird may remove one or two of the host’s eggs and the remaining ones are left behind. After hatching, it is believed that the begging of the foster siblings results in more food being brought to the nest, allowing the young cowbird to grow up faster. By contrast, the baby cuckoo engages in the murder of its siblings and will eject unhatched eggs and chicks if they have been born. It lifts them onto its back, and after bracing on the sides of the nest, rolls the egg or the chick over the edge to its death. The cuckoo bird is born a serial-killer! 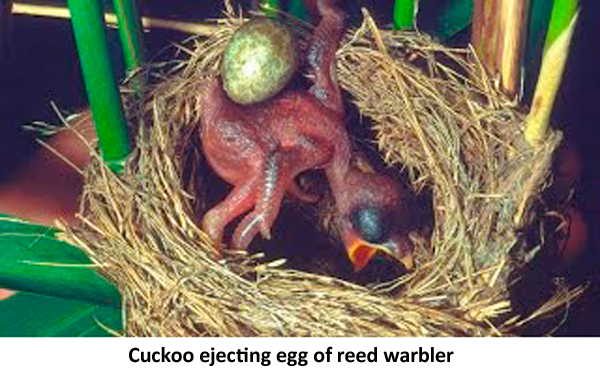 To obtain access to the host nest the brood parasite uses ingenious ways to terrorize its victim and persuade it to raise its offspring. It may wait patiently until the nest owner leaves, and then quickly dart into the nest to deposit an egg. In the case of the common cuckoo bird its appearance resembles that of a bird of prey, with barred underparts and a curved bill, and there is evidence that it uses its outward pretense as a hawk to frighten away the host.

The cuckoo also misleads its host by disguising its egg to look like the host’s egg in color and shape – so the nest owner does not recognize that the egg is foreign. They may also have thicker shells for protection and incubate over a shorter period than the host’s eggs.

Not surprisingly, many hosts do not accept this assault lying down. Some learn to recognize the invaders and go berserk and attack them by landing on them and pecking at them. They may also visually or acoustically recognize the foreign egg and push it overboard, or not incubate it and sometimes abandon the nest altogether. However, not all hosts possess these skills and may simply accept the intrusion and incubate the parasitic egg. Some hosts are too small to push the egg out of the nest and simply build a new nest on top of the old one.

There is no strong evidence that this practice leads to the extermination of host species although brown-headed cowbirds are increasingly abundant and have expanded their range. Springtime trapping is allowed in certain states to control cowbird populations. 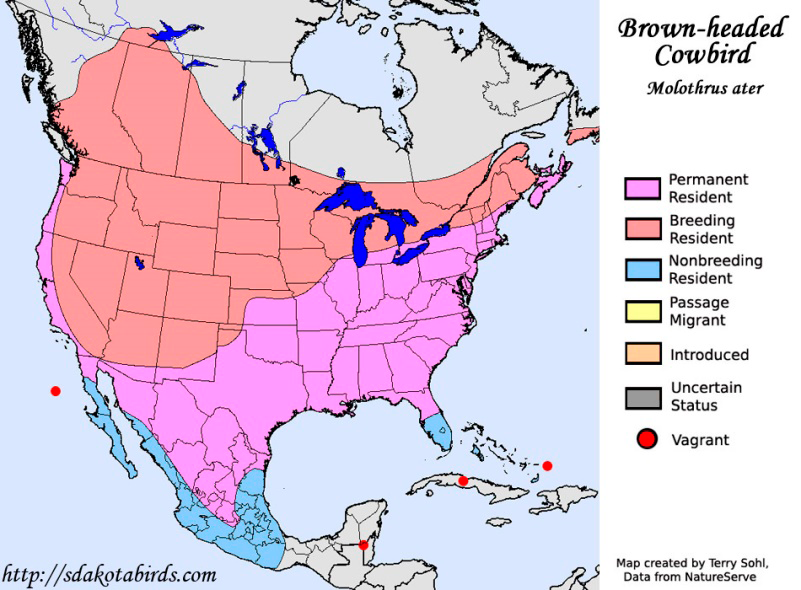 An exception to the risk of extermination is the handsome Kirtland’s warbler that came close to disappearing in the 1970’s when, because of loss of habitat as well as nest parasitism by the brown-headed cowbird , its number of breeding pairs fell to 167. The species occupies a small breeding area in parts of Michigan, Minnesota and Wisconsin, and winters in the Bahamas. Because of actions taken to trap the cowbird and plant new Jack Pine forests, the number of breeding pairs is now approaching 1500, and in October 2019 the bird nationally was delisted from the US Endangered Species Act, 1973. 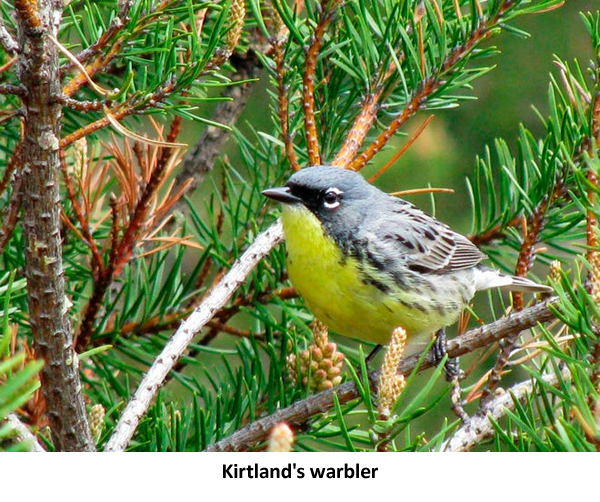 For more on the common cuckoo bird, I refer you to the first chapter of my new novel She Wore a Yellow Dress. And the next time you are accused of having “gone cuckoo”, know that the term comes from the cuckoo’s incessant and pointless calling that is likened to a person who speaks senselessly, monotonously and without purpose (i.e. stupid, barmy, insane). And if you watch One Flew over the Cuckoo’s Nest, recognize that the title is based on an old children’s rhyme featuring three geese – “One flew east, one flew west and the other flew over the cuckoo’s nest” – an apparent reference to a mental hospital where “crazy” or “stupid” people are sent.

But the main story here is brood parasitism. It seems to be a risky reproductive strategy, but for the European cuckoo and the North American cowbird it works.  Whether it is egg mimicry, or physical appearance and call mimicry of the chick, or the host’s inability to reject the intrusion, the practice has continued over time and appears unlikely to end. Of 8,600 living species of bird worldwide about 75 are brood parasites, many of them cuckoos, but also included are the South American black-headed duck, African weaver birds and the honeyguides of Africa and Asia.

Author: John Cammidge
Filed Under: Bird Blog
A Species of Duck that Gives its Name to a Color
Waterhen, Moorhen or Gallinule – Which is It?