One of my favorite species of birds is the surf scoter, a sea duck that is abundant during October through April along the North American west coast, from south-east Alaska to California and as far south as central Baja (Mexico).  The surf scoter also winters on the east coast from Nova Scotia to Florida. They arrive after their summer breeding in the boreal forests and tundra of Alaska and northern Canada.  Additionally, a few vagrants end up being blown off course or are disorientated, and finish up wintering in Western Europe, as far south as the UK, but the species breeds exclusively in North America.

These large, stocky birds, 19 to 24 inches (50 to 60 cm) in length, are often seen during winter in flocks on estuaries and on marine waters near to the shore. Typically, scoters are closely packed together and may take off as a group if disturbed. In California, the species is an occasional summer resident and may be seen around river mouths and near harbors. Because of their preferred marine habitat, surf scoters are at risk whenever an oil spill occurs.

The recent October 2021 Huntington Beach oil spill in California, initially estimated at around 130,000 gallons but later reduced to 25,000, was such an accident. Deceased birds identified by the Oiled Wildlife Care Network currently number close to 80 and include the American coot, black-crowned night heron, brown pelican, two species of cormorant, western and California gulls, Northern fulmars, several shearwaters, and a red-footed booby. Fortunately, no surf scoters were reported. Birds that survived, but that were badly oiled, include California gulls, ruddy duck, brown pelican, snowy plovers, sanderling and western grebes. However, avian casualties are notoriously difficult to calculate, and a rule of thumb is that for every dead bird found, at least another four or five have died and their bodies not recovered. For example, the April to September 2010, 87 day Deepwater Horizon spill that released over 200 million gallons of oil into the Gulf of Mexico is estimated to have killed over 100,000 birds, even though only 8,200 carcasses were collected. The low recovery rate in part was blamed on ocean currents that carried the bodies out to sea.

When birds become oiled, their outer feathers clump together and are no longer able to repel water which percolates into the inner down feathers causing hypothermia. The bird may then die of exposure, sink and drown, or if the bird makes it to land, it becomes vulnerable to predators because it cannot fly. 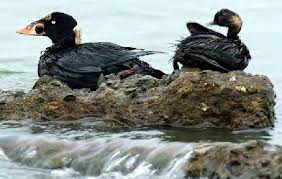 Surf scoters belong to the family of sea ducks that includes eiders, goldeneye, bufflehead, Harlequin ducks, and mergansers. Their first name comes from the habit of foraging in ocean surf and diving through the foam of breaking waves. The origin of the word “scoter” is unknown. Male adult scoters are unmistakable when seen on the water, with velvety black plumage, a conspicuous white forehead and nape, and a large swollen, irregularly-shaped, multi-colored bill (orange-yellow, white and black). The species is sexually dimorphic (exists in two distinct forms), with the female possessing duller brown feathers, slightly darker above than below, and sometimes pale patches of plumage on the cheek and nape. The female’s bill is dark grey. The surf scoter’s diet includes mollusks, crustaceans, some plant material, small fish, herring spawn and aquatic insects, which are caught by diving and using their specially adapted bill.

Population numbers are not well understood but are generally believed to be in decline. For example, in 1987, around 30,000 birds were estimated to winter in the San Francisco Bay, but in recent years that number has fallen to around 3,000. Even so, the largest population of surf scoters is believed to follow the Pacific Flyway and winter along the west coast of the United States. Rough global estimates published a few years ago were in the order of 500,000 individual birds, but with numbers decreasing. Reasons for the decline are unclear but suggestions include global warming that restricts the species’ boreal breeding territory, increased development of urbanized estuaries, contamination and pollutants affecting reproduction, invasive species affecting the food chain, and individuals falling prey to bald eagles, river otters, orcas, and sea lions.

Even so, they are a delight to watch as they congregate together, bob colorfully on the water, plunge head first to catch their prey, and individually fly short distances to improve their foraging success. Sometimes they are not alone. Other ducks mingle with them and may cause confusion when trying to identify the species.

First, there are two other types of scoter in North America, called the black scoter and the white-winged scoter. Both are nearly circumpolar in their distribution north of the Equator, and in Europe go by the names of common scoter and velvet scoter. The black scoter was originally called the common scoter in North American bird field guides, and controversy remains today over whether they are the same species. Similarly, until 2019, the Eurasian velvet scoter was considered the same species as the North American white-winged scoter; just name differences.

Their appearances are different from the surf scoter. The black scoter adult male is all black and characterized by a bulbous bill that is mostly yellow. The female looks like a female surf scoter but with more extensive pale areas on its cheeks and neck.  The white-winged male variety is mostly silken black with large white patches on its wings, an orange-red bill, and a white comma-shaped patch around the eyes. The female is dark brown, lighter below, with two smudgy white facial patches and white wing patches. Their global population is believed similar to that of the surf scoter, and they winter down both North America coastlines, with some seen on the eastern Great Lakes.

Additionally, it is not unusual to see other species of duck mixed in with scoters. Two species that are primarily black and white, and might cause confusion, are the goldeneye and bufflehead. The goldeneye is medium sized, has a much smaller bill that is blackish in color, has an iridescent green head, a white spot behind the bill, and its neck and underparts are white, unlike the dark feathers of the scoter; females have a warm brown head and a yellow spot at the end of their bill.

The male bufflehead is conspicuously white and black, with a white chest and flanks, an iridescent purple-green head and throat, and a large white patch on the back of the head.  The female is brownish with a single white patch on the cheek. Again, the amount of white distinguishes them from scoters.

Finally, do not confuse scoters with the much smaller American coot that is dark brown, other than for its white bill tipped in black. Also, it prefers fresh-water lakes, ponds and rivers rather than marine water.

Surf scoters became one of my “favorites” many years ago when it was the first rare vagrant species I saw as a teenage ornithologist while visiting Spurn Point Bird Observatory in Yorkshire. Some details of these exploits are included in my recent novel She Wore a Yellow Dress, and it was during the fall of 1961 when, with a group of other birdwatchers, I saw three scoters swimming out at sea. Two were common scoters but the third had an orange bill and two patches of white that confirmed the bird was a male surf scoter. The excitement of my colleagues was intense. Apparently, this was the first surf scoter ever recorded at Spurn Point, and was believed probably to be the first ever identified in Yorkshire. Along with the ortolan bunting and icterine warbler, it made its way onto my teenage list of rare birds spotted. Today, about 20 surf scoters are reported each year in the UK, although speculation is that sometimes they are one bird that is seen in several different locations.

Hopefully, we will spend more time in the future studying and improving our knowledge of these spirited sea ducks, and take action to protect their numbers. Progress has been made with oil spills by implementing formal procedures that monitor birds harmed by crude oil and providing rehabilitation services. Much was learned as a consequence of the 1967 Torrey Canyon disaster off the coast of southern England that released 25 to 35 million gallons of crude oil; the Amoco Cadiz incident off the northern French coast during March 1978 that released nearly 60 million gallons, killing an estimated 20,000 birds; the Santa Barbara catastrophe of 1969 that spilled up to 4.2 million gallons of oil; and the Exxon Valdez 1989 incident that leaked about 11 million gallons of crude oil along 1300 miles of the Alaskan shoreline.